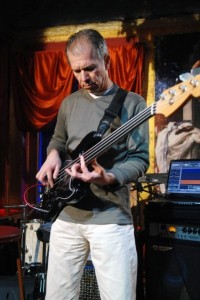 Bass player, composer, arranger. Mainly session bass player, takes part in thousands of recordings and concerts in Greece and all around the world , since 1980.He records a double CD and tours in Spain with famous Leo Brower.Forms a jazz-trio with German guitarist Toto Blanke and drummer G.Trandalidis. Records 3 records with the famous singer “Fairuz”. Performs in concerts with singer Shirley Bassey.For 2 years records and performs with famous rock group “Socrates drunk the conium”.He performs in concerts with B.Bands of William (Bill) Russo and Dan Owens.Also in B.Band performs with the famous trumpet player Rex Richardson.

From 1997 till 2006 he was a member of the “BIG BAND” of municipality of Athens,where he played all the repertoire of Big Bands with old and new tunes.He had the opportunity to perform with famous soloists and band leaders from all over the world.Currently a member of contemporary music orchestra of Greek radio-television.
Composes mostly jazz and a great deal of classical music for fretless bass. On February 2006 performs as a soloist at the Greek National Opera theater in Athens Greece, his composition “LIGHT TOUCH,HARD STROKE”, a concert for fretless bass and full string orchestra, with the “Contemporary Music Orchestra” of Greek radio-televizion (ERT) conducted by Andreas Pylarinos.

“PORTRAIT” is his debut album consisting of 12 of his own compositions.In this work apart from fretless basses he played also all keys, along with drummer Spyros Panagiotopoulos, soprano sax player Dimitris Kollias, trumpet player Manos Theodossakis and Sharon Zikogianni on vocals.

On June 2008 The “Bass-Musician-Magazine” selects his cd “PORTRAIT” along with other five cd’s to be reviewed by its readers.Soon after that he is suggested to be a voting member of “Recording Academy”(the Grammys committee).
Since August 2008 “PORTRAIT” is on iTunes stores all over the world. “SATURDAY’S SUN” album, released June 2014 and “THE BLUE RAIN” album, released Dec.2014 by CDBaby.